Thanks to the unique natural surroundings and the astronomical patterns of Egypt such the cyclic order of the sun and the seasonal pattern of the Nile floods the enriched the soil of the delta, all these phenomena’s inspired the Egyptians to wonder about eternal themes which are order, chaos and resurrection that eventually led to the creation of the ancient Egyptians gods and goddesses. Most of the information about the ancient Egyptian gods were discovered on temples walls located at Luxor & Aswan. Here is a list of the top worshiped ancient Egyptian gods and goddesses:

All the ancient Egyptian gods had names, individual personalities and characteristic plus wore unique outfits. Each deity had their own domain of influence and was associated with a different aspect of human life. 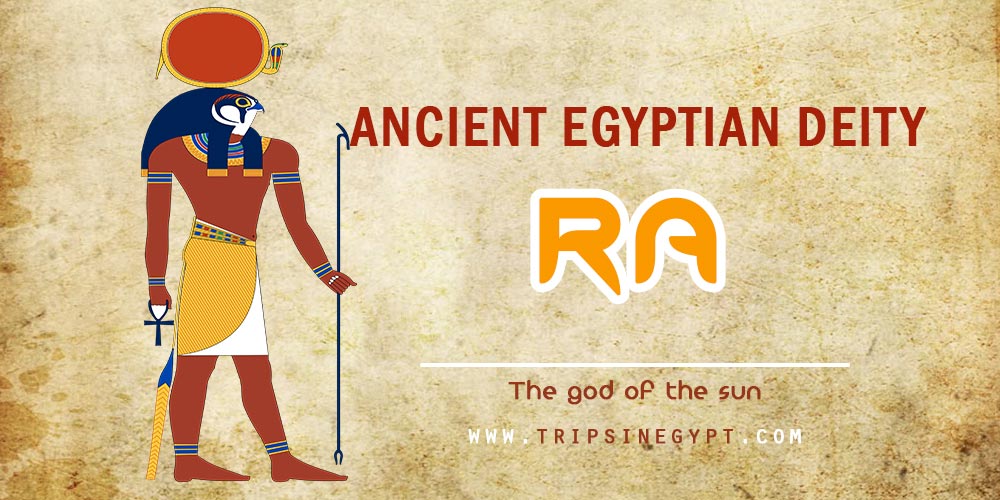 Known to be the sun god, supreme lord of the gods, creator of life and the human race, he was the supreme creator of the ancient Egyptian gods and the ruler of both the living and the dead. The father of Shu the air god and Tefnut goddess of moisture and rain. He was the first celestial divine being to stand on the primordial mound of chaos and create life and order instead. His duty was to protect the universe from the primordial serpent “Apophis“. He looked like a child in the morning, an adult in High noon and an old man in the evening, he also had the head of a hawk and a solar disk on top his head with a coiled serpent around it. when the god Amun rose to Power, Ra’s position was unmatched as he even merged with him and became the supreme god Amun-Ra. 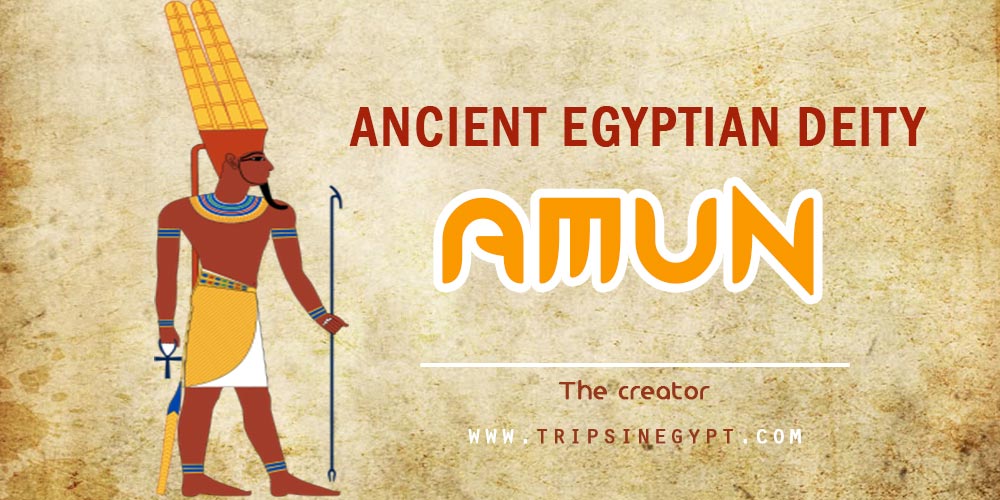 He is one of the most powerful and popular ancient Egyptian gods. he was the patron of the city of Thebes and was worshipped as part of the Theban Triad of Amun, his wife Mut and son Khonsu. He rose to power in the new kingdom to the point other gods were considered to be a mere aspect of Amun, in the mortal world the position of the god’s wife of Amun was even on par with the position of a pharaoh. 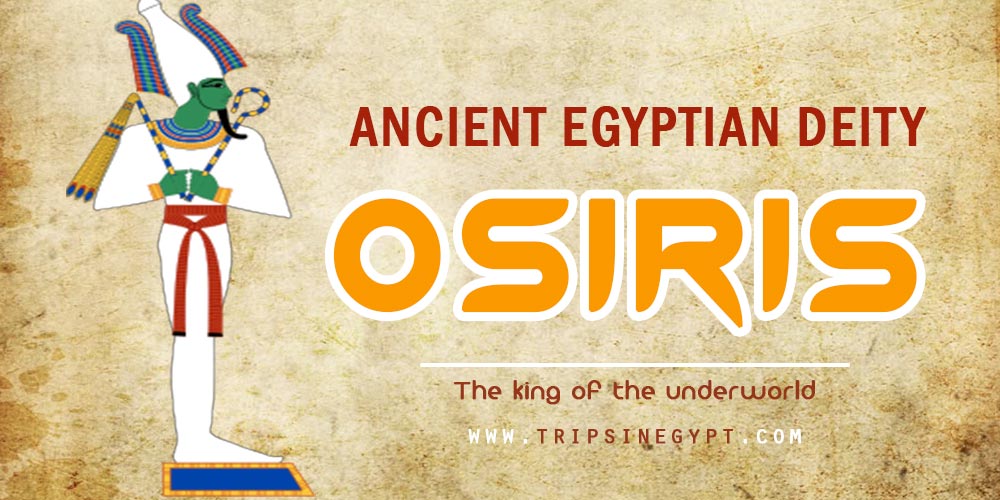 One of the five original gods of creation, known to be the king of the underworld and lord & judge of the dead. He is highly famous because of the famous myth which involves him being killed by his brother the desert god Set and then brought back to life by his sister-wife Isis and his brother Hours The Elder and then chosen by Ra to be the govern of the underworld as for his Brother set he was Killed by Osiris’s son the Sky God Horus. He is usually depicted as a mummified bearded king with green or black skin. He took part in the judicial process in the hall of truth where the heart of the deceased is weighed against the feather of maat and then Osiris would decide his fate. People desired to be buried at Abydos near his cult center in order to get his graces and get easier access to the fields of reeds a.k.a paradise. 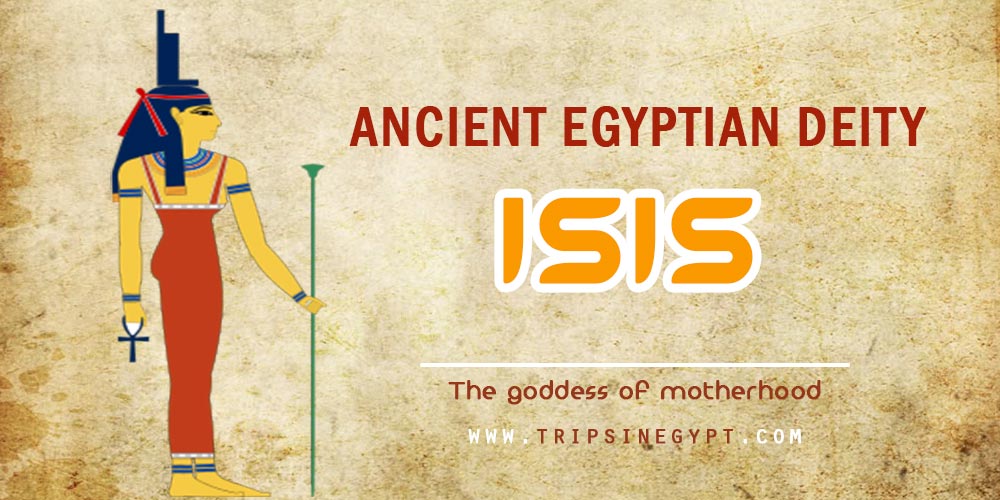 She was one of the original five gods, the wife of Osiris, the Mother of Horus, the mother of the kings and was known as Mut-Netier “Mother of the gods” and Weret- Kekau “The Great Magic“. Her Egyptian name id Eset which means “Goddess of the throne“. She was really popular because of the role that she played at the infamous Osiris myth. She took part in every aspect of the ancient Egyptian human life as a symbol of magic as he resurrected his life and a symbol of motherhood because she gives birth and protected her son the sky god Horus. Her cult spread all across the globe and the Greco-Roman world. 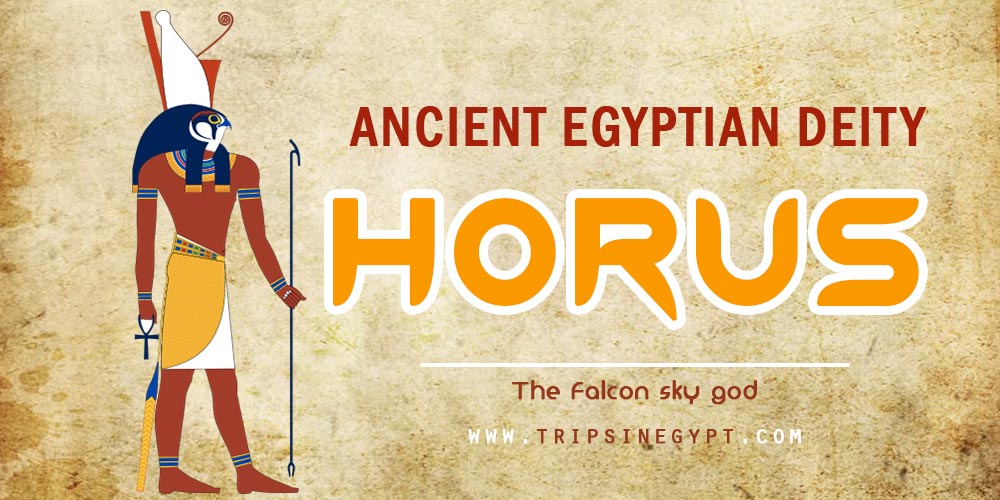 One of the most famous ancient Egyptian gods is the Falcon Sky God, he is the son of Osiris and Isis, and the immortal fighter of the desert god Set, his uncle, and his father’s murderer. He is viewed mainly as a god of the sky, plus a god of war and victory because of his mythical battle with against Set which lasted for 8 years, but later he emerged victoriously and brought peace and order to the unified land of Egypt. He became associated with the kings of Egypt as they viewed themselves as an incarnation of the avian god in life and his father Osiris in death. He is depicted as a man with a falcon or a hawk’s head, his most famous symbol the legendary Eye of Horus which symbols protection and sacrifice. 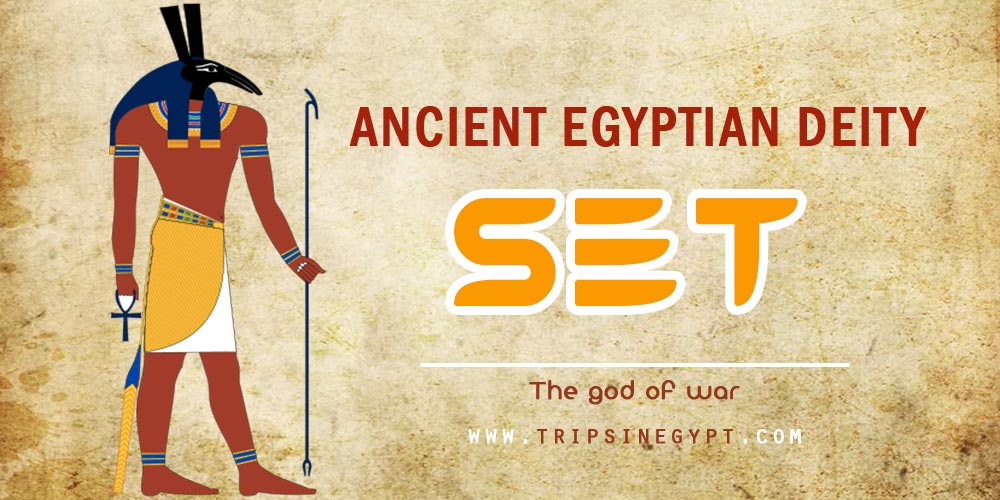 The god of War, chaos, the desert and pestilence, Set became the antagonist of ancient Egyptian gods for murdering his brother Osiris and becoming a Great symbol of evil. The name “Set” is translated to “Instigator of Confusion” and “Destroyer“. He is depicted as a red beast like a fox with cloven hooves and a forked tail. He was always associated with catastrophic events like storms, fires and any kind of a disaster. His battle with Horus is quite mythical as it lasted for eight years and everything was on the verge of destruction but he was defeated. 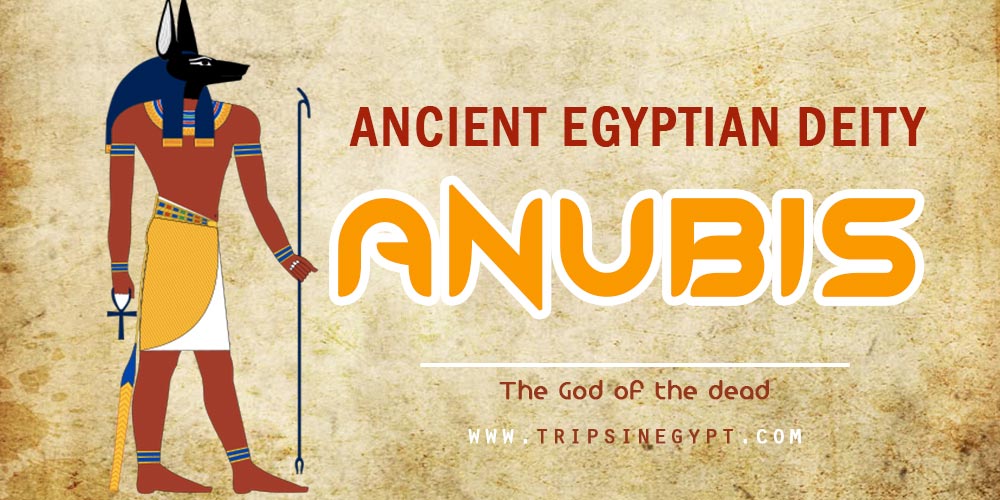 The God of the dead Anubis is probably the most recognizable of the ancient Egyptian gods as he is depicted as a man with the head of a black jackal carrying a staff. He is the son of Osiris and Nephthys. His duty was to guide the souls of the dead to the hall of truth and part of the ritual of the weighing of the heart of the soul of the deceased to the feather of Maat in the afterlife. He became a true symbol of death as all the tombs around Egypt were considered to be his house of worship. The god of writing and wisdom, knowledge and truth, Thoth, he is also known as “Lord of Time” and “Reckoner of years” as he is credited with the invention of writing the alphabet, mathematics, surveying, geometry, and even botany plus he was also the record keeper of the gods. The symbolized the passage of time and the powerful magic behind the divine knowledge of words. He was the patron god of libraries, astronomers and scribes, and was a divine ally and benefactor of humanity who provided them the heavenly gift of the spoken words. He is depicted as a man with the head of an ibis holding a writing tool. He holds a highly important position between the kings as he gave them the power to maintain order on his subjects. He played a role in the weighing of the heart in the hall of truth and was able to give a nut to five days of moonlight to give birth to original five gods. 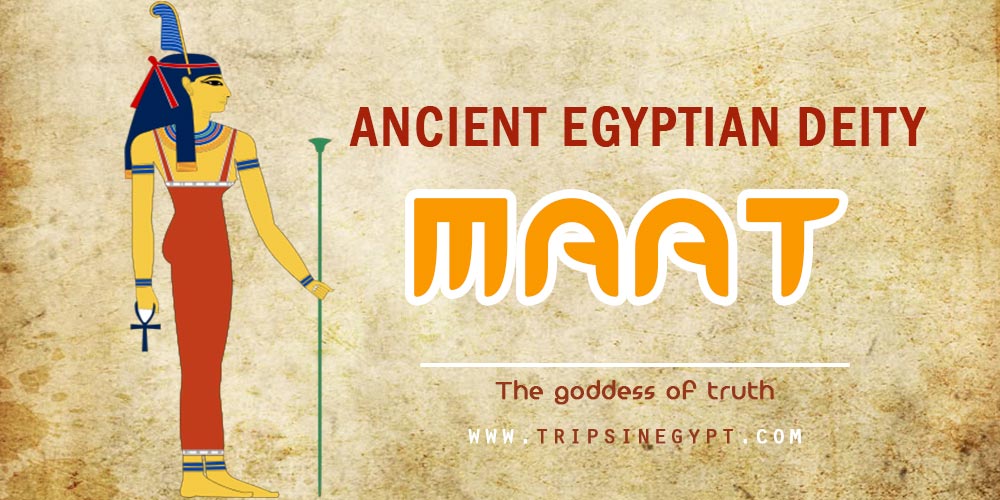 Maat is known to the goddess of truth, justice and embodies the principle of harmony. She had an essential role in ancient Egyptian society; she was viewed as a guideline for human behavior to follow the order of the gods in order to establish a cosmic order. This concept of harmony revolved around the virtues of truth, family life. She was responsible for regulating the stars and seasons and maintaining a universal balance between the various factions. Maa’t was created from reflecting in the studies of ancient Egyptian astronomers who charted earth’s orbit among the celestial routes of the infinite stars and planets. She was depicted as a winged woman with an ostrich feather on her head. She had the most important task in the weighing of the Heart during the judicial process in the afterlife as she transformed into a Feather that symbolizes the scale of justice. 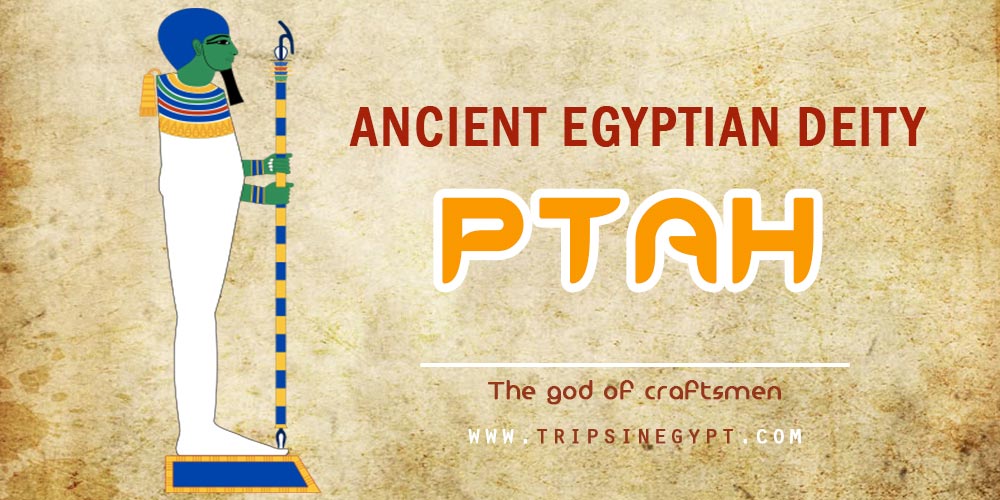 The main God of Memphis Ptah personified the concept of creation, was known as the creator of the world, and lord of truth. He was the patron of sculptors, builders, painters’ craftsmen and any form of an artist. Ptah is depicted as a mummified man wearing a skull cap holding the Was scepter combined with the ankh and the Djed. he was hailed as a self-created and known that he created the universe and the life in all the different entities around the world. He was highly famous as during his time as the name Egypt derived from the Greek word Aigyptos which corresponds to the word Hat-Ka-Ptah that means “Temple of the soul of Ptah“. 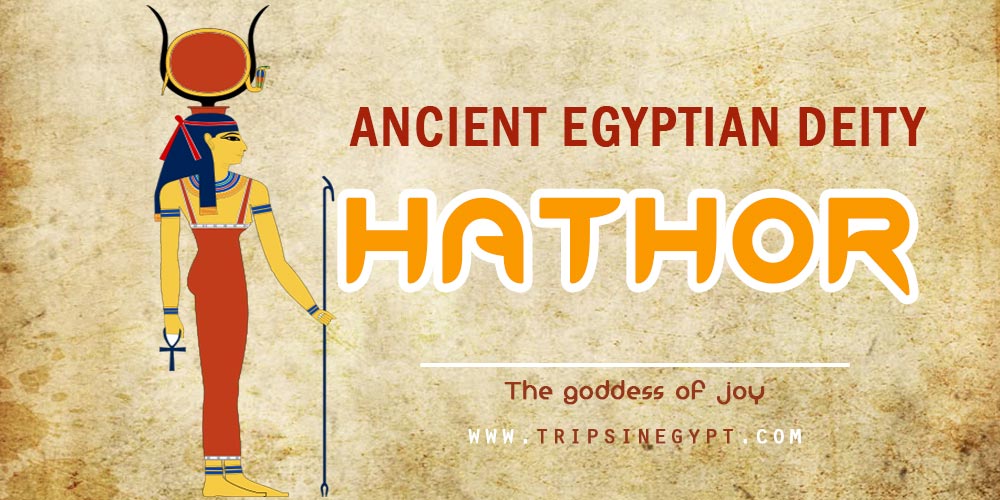 The ancient goddess of joy, feminine love, motherhood, celebration, and drunkenness. She is known to be “the lady or drunkenness” and “the lady of the Sycamore” and is associated with gratitude, thankful heart and with all the matters of womanly love and health. Her name means “domain of Horus” because of her close to the avian falcon deity. In the afterlife, she helped guide the souls of the dead towards paradise and was one of the deities on board the sun barge helping Ra in protecting Egypt from Apophis. She was depicted as a woman with the head of a cow or in the form of an entire cow and viewed as responsible for bringing the floods of the Nile and fertilizing the land. One of the most famous deities of ancient Egypt Bastet was known to be the beautiful goddess of cats, childbirth, fertility, woman’s secrets and the protector of the home from evil or any kind of misfortune. Due to her high stature in Egyptian society, cats were very revered and respected within Egyptian society to the point the harming or killing a cat would be sentenced by death as the battle of Pelusium in 525 was won by the Persians because they used cats in from of their army and shield which made the Egyptian army surrender. Bastet was depicted as a cat or a woman with a cat’s head. 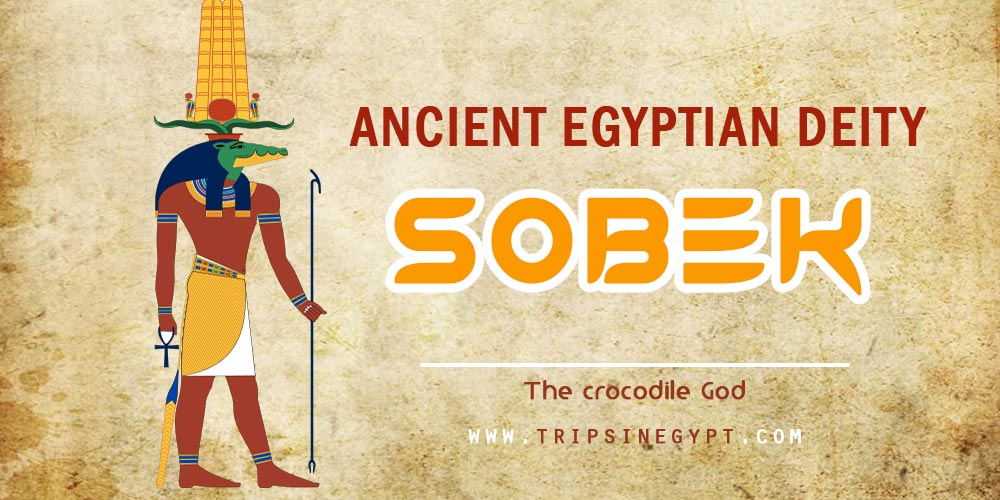 The crocodile God Sobek was known as the lord of marshes and wetlands all across Egypt and he was also associated with medicine, surgery and sudden death. It was believed that his sweat & tears were the sources of the waters of the Nile. He was highly popular and powerful during his time; it is believed that he lived on a mythical mountain at the horizon where he ruled and was linked with Ra to form what is known to be Sobek-Ra. He was depicted as a crocodile or a man with a crocodile’s head.

Finally, Egypt is really worth a visit, so don’t hurry and check our Egypt tour packages which cover most of the attraction sites in Egypt.