The Nubian Museum of Aswan

Aswan Nubian Museum is located in the Elephantine Island on the southeastern side of Aswan in Egypt close to the ruins of Abu. It was opened in 1912 and it features many artifacts from Nubia during the construction of Aswan High Dam. Through our article, you will get all the info about Aswan Nubian museum including:

What You Can Find Inside the Aswan Nubian Museum 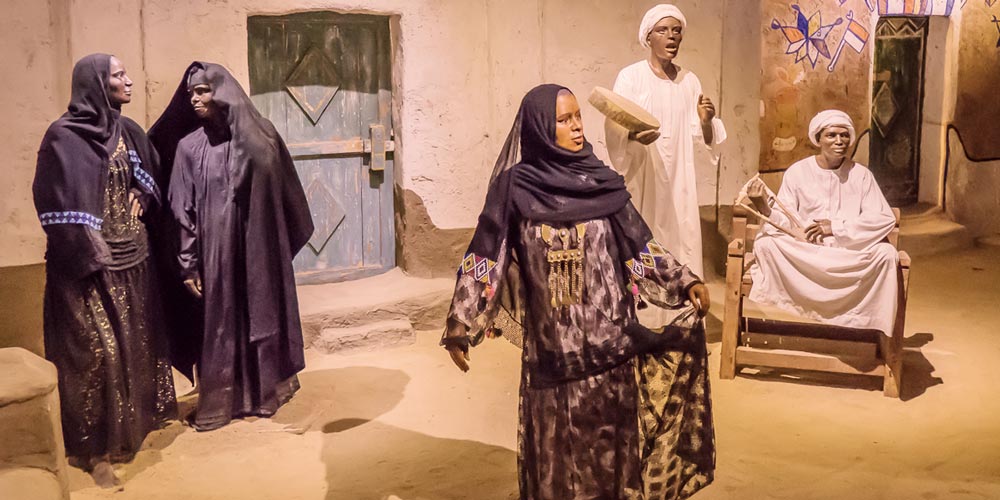 The most important things of the Aswan Nubian Museum include a bone comb with two giraffes carved on the handle, a vessel made out of an ostrich egg and decorated with incisions and a Paleolithic ax. There is an area inside the building called Group A, which demonstrates the relationship between the people in southern Egypt and the people in Nubia. In this section, you can find a polished quartz cosmetic palette used for crushing galena powder. It was used for eye makeup and a vessel decorated with a rowing boat with multiple oars, ostriches and undulating lines symbolizing water.

In the Ballena section in Aswan Nubian Museum, you find a pair of silver bracelets. The interesting thing about the museum is that it includes Christian displays such as a wooden Coptic cross and a Coptic prayer book with Coptic inscriptions. There is also Byzantine-style fresco from the church of Abdalla Nirqi, and a Fragment of a linen shroud depicting a human face. After Islam became an official religion in Nubia in 641 AD, an Islamic section was opened inside the museum that contains a child’s tunic from the Fatimid period, a tombstone from the Fatimid period, 968-1070 A.D. and a water vessel from the Mamluk period.

The final section in the museum is about the modern life of the Nubians and it includes a silver pendant and anklets, a lot of Nubian handcrafts. Moreover, there is a Russian chain worn on the forehead by Nubians, and a pectoral jewelry piece named the Bey necklace. 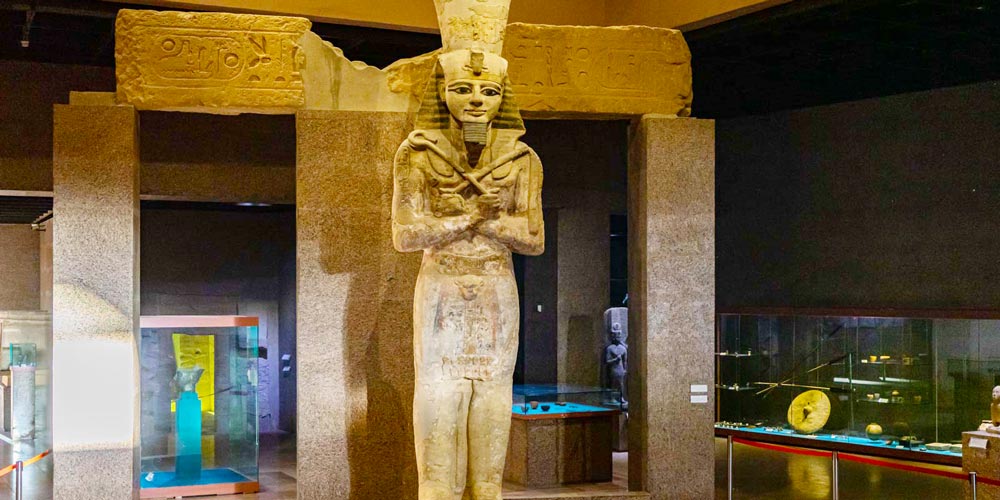 Some discoveries have been found on Elephantine Island that is why a new section was opened in the museum in 1990 to show the wonderful artifacts. Among the that have been found, there were utensils, weapons, pottery, and mummies. There are a sarcophagus and mummy of a sacred ram, the animal associated with Khnum in the room at the right of the entrance.

Each of those artifacts explains a specific facet of life on the island that dates back to ancient times. The villa of Sir William Willcocks, who was the architect of the High Dam, housed the main part of the Nubian Museum. This villa was built in 1898 and became a museum in 1912. This building shows the beauty of traditional Nubian construction.

The Construction of Aswan Nubian Museum 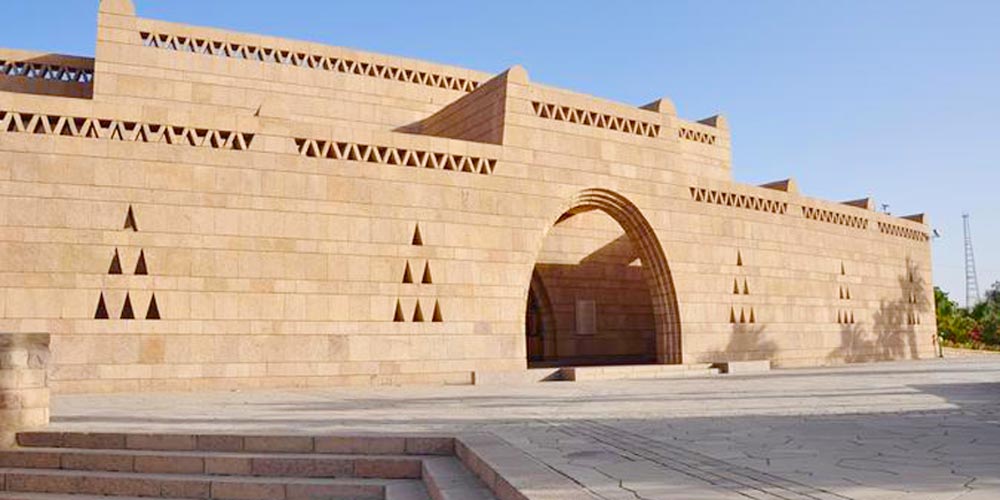 Muhammed El-Hakim designed Aswan Nubian Museum. He succeeded in constructing it to fit the surroundings. It covers around 50.000 square meters. The museum has a big importance in telling tourists everything about the Nubian history as every single architect has a note in Arabic and in English written underneath. The garden of the museum is the main important part of it as it exhibits around 80 statues and historical rocks that were dedicated to the gods of ancient Nubia in addition to some artificial lakes and waterfalls.

The Ruins of Abu 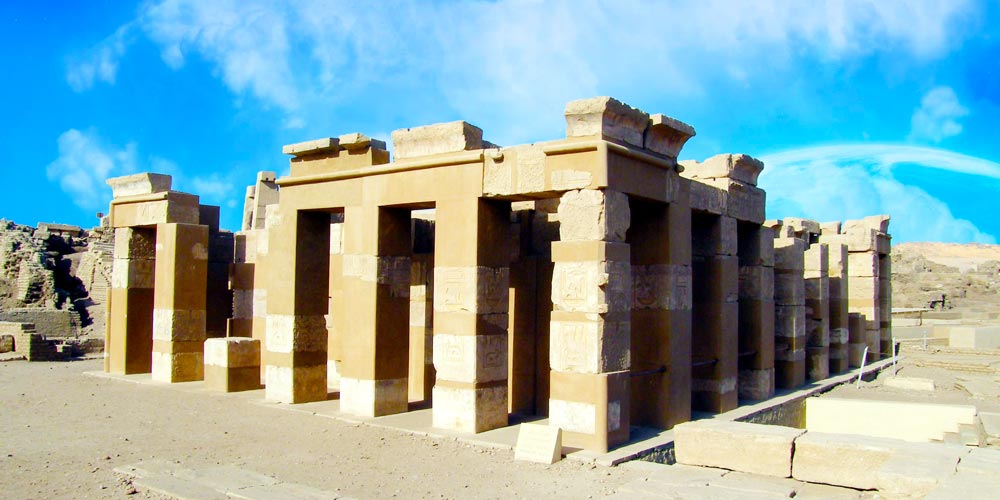 The Ruins of Abu are considered an open museum that holds inside the great Nubian Civilization. Inside the ruins, there is a temple of Khunum, a step pyramid that belongs to the 4th dynasty, Satet Temple from the 18th dynasty, and there is a Ptolemaic chapel. There are also two Nilometers, which show the level of the Nile River and show if Aswan would enjoy a bountiful harvest or not.

The Nubian Museum & the Ruins of Abu attract tourists because of their greatness and the beauty of their artifacts. When the High Dam of Aswan was built, the Nubian museums and buildings faced a huge threat from the flood. The UNESCO and the Egyptian government did a lot of effort to save as possible monuments as they can as all the lands of Aswan drowned from the water of the Nile.

Rare Wonders Are Waiting to Be Explored “With Trips in Egypt”

There is no doubt that Aswan has very beautiful attractions including the great High Dam, the mesmerizing Unfinished Obelisk, the fanciful Philae Temple in addition to the gorgeous Kom Ombo and Edfu Temples. There are also other hidden attractions in Aswan like Aga Khan Shrine and the beautiful Bazaar of Aswan, Nile Cruise holidays are the best things you can do in upper Egypt to discover the wonders of Luxor and Aswan, or you can experience one of our Egypt tour packages which enable you to explore the enchanting attractions of Lower and Upper Egypt. Don’t miss the chance and book us now: