Philae temple is located in one of the most important monumental sites in Aswan “The Nubian City“. It was a rocky island that was called in Hieroglyphic “Apo” which means Ivory. It is located 12 km south of Aswan on Aglika Island, downstream of Aswan High Dam and Lake Nasser. It was originally located near the expansive first Cataract of the Nile in Upper Egypt but it was relocated to nearby Agilkia Island as part of the UNESCO Nubia Campaign project. It was a sacred site as an ancient pilgrimage center for the cult of Isis. This amazing temple was reopened in 1980. Through our article, you will learn:

The History of Philae Island 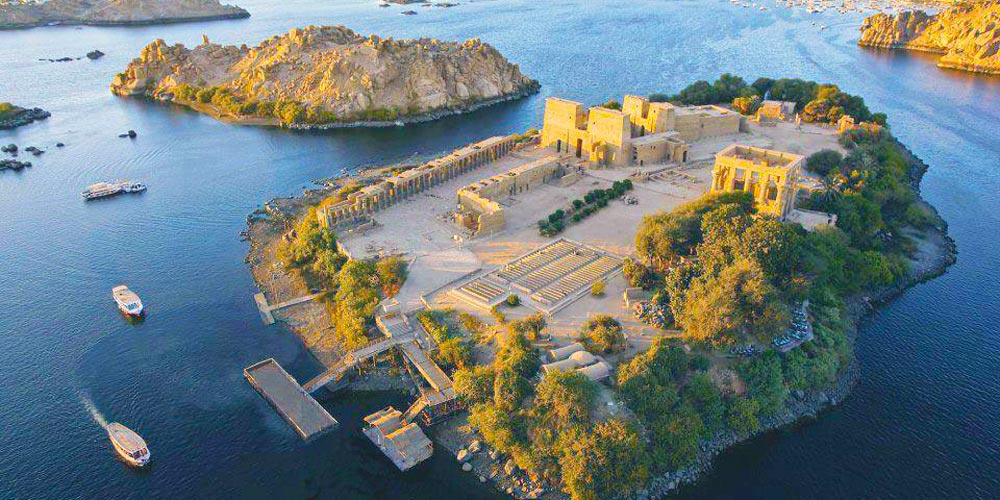 Although Philae was a small island, it is one of the most picturesque in all of Egypt. It wasn’t more than 380 meters long and 120 meters board. It was one of the burying-places of Osiris. In the 19th century, William John Bankes took the Philae obelisk to England. It threw great light upon the Egyptian consonantal alphabet when it was compared to the Rosetta stone.

The Philae islands weren’t just sacerdotal abodes but they were also the centers of commerce between Meroe and Memphis. Philae was always a remarkable place because of the effects of light and shade, which results from its position near the Tropic of Cancer. There was a problem related to the low dam in Aswan, and the rising water in Aswan required the government to relocate Philae temple into another island, which was the mission of UNESCO that moved the temple to Agilkia Island. 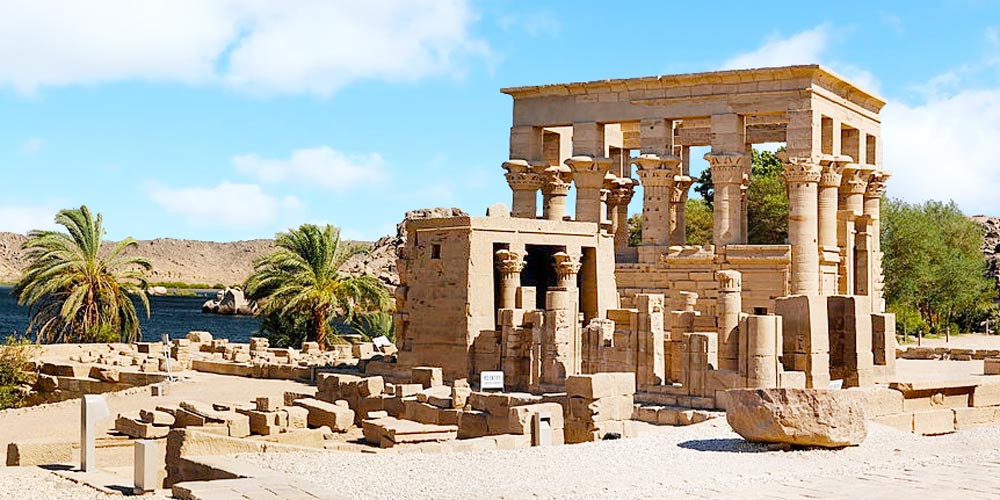 The construction of Philae Temple was completed in around 690 A.D so it is considered to be the last of the ancient temples constructed in the classical Egyptian style. It was built to honor the goddess Isis and serves as an amazing example of the cult that was built around the story of  Isis and Osiris.

The temple of Philae was considered to be the most sacred temple among the whole ones by both Egyptians and Nubians peoples, so this is because God Osiris was buried on the island where the temple stood. Priests were the only ones, who were permitted to dwell there, even fish and other aquatic animals never approached the shores of the island.

An Outer Look at Philae Temple 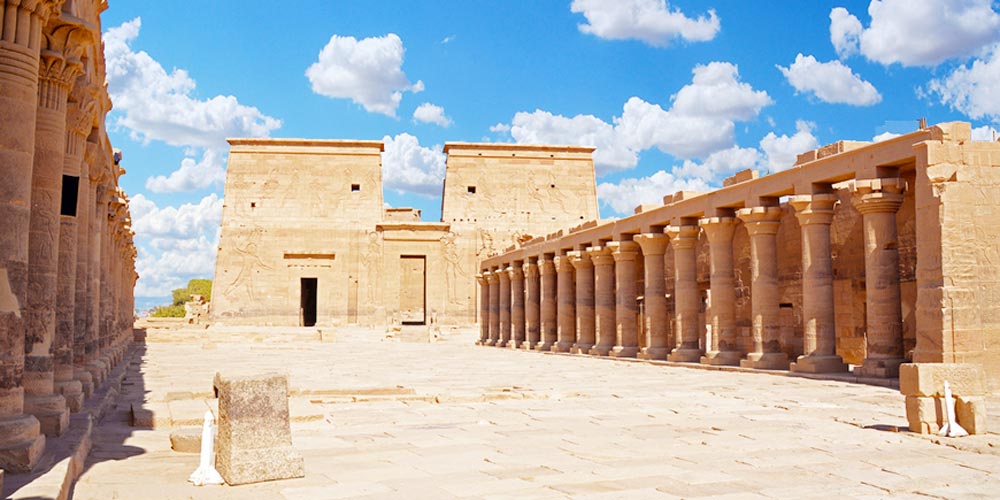 Through the first Pylon, you can get into Philae temple. There is a building called the Birth House on the western side of the forecourt that was dedicated to Hathor and Isis in honor of the birth of her son, “Horus“. It is surrounded by colonnades. The second Pylon is an outstanding doorway that is 32 meters wide and 12 meters high. In front of it, there are foundations of a small chapel. There are also some faded Christian paintings.

A Closer Look Inside Philae Temple 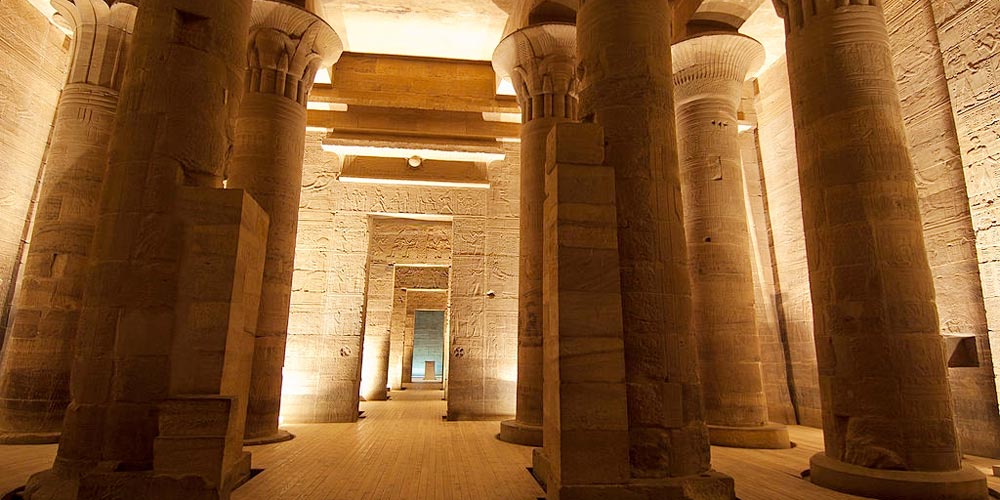 In the first room of the temple, you’ll find eight columns that were separated from the court by screens. Many Coptic crosses and Greek inscriptions are found inside this room, which reveals the transformation of the temple into a Christian place during the Byzantine age under the reign of Bishop Theodore. Above the door, there is an inscription that commemorates the archeological expedition that was sent in 1841 to Philae.

In the south wall over the door, the top relief shows Horus seated on a bench with Nephthys and Isis presenting the crowns of Lower and Upper Egypt. There are unfinished obelisks to the left of the door showing the king making grants of land. On the right, there is an amazing relief that depicts the source of the River Nile.

The Sanctuary House of Isis 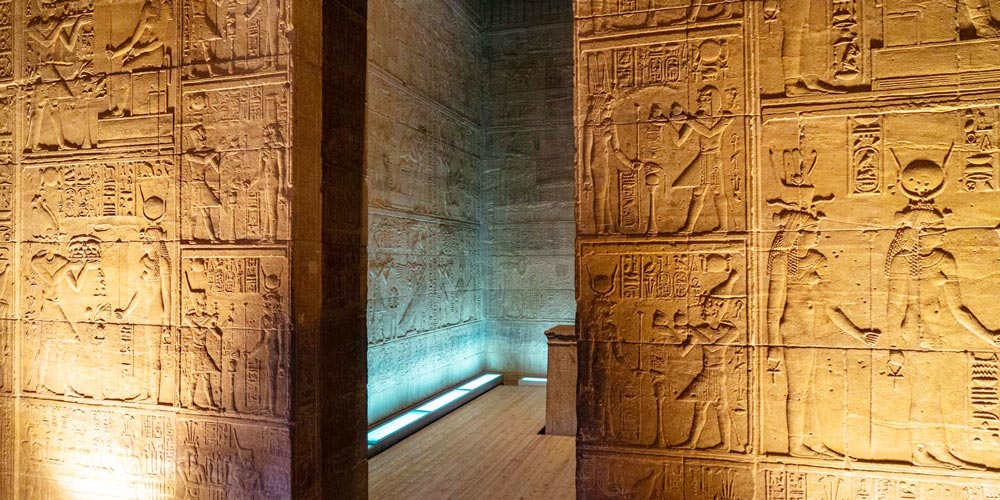 After some antechambers, you can reach the Sanctuary House. You can find a small room with reliefs of the king in the presence of Isis to the left of the first antechamber but on the west side of the room, there is a door that leads out of the temple to reach Gateway of Hadrian.

Explore All the Interesting Things of Egypt with “Trips in Egypt”

Enjoy the breathtaking atmosphere of Egypt and prepare yourself for an amazing experience in the land of history and civilization. All of our Egypt tour packages provide you the best Egypt tours that you will never forget, where you will visit the Great pyramids of Giza, the Sphinx, Abu Simbel temple, the temple of Philae, the famous Karnak temple and many enchanting sites. Discover the secrets of Upper Egypt between Luxor & Aswan while enjoying one of our luxurious Nile cruises. Learn dive as it should be in the divine pure water of Hurghada and discover the great water world and the colorful coral reefs. Check our Egypt tours below and contact our tour operators to get the best tour itinerary with affordable prices: