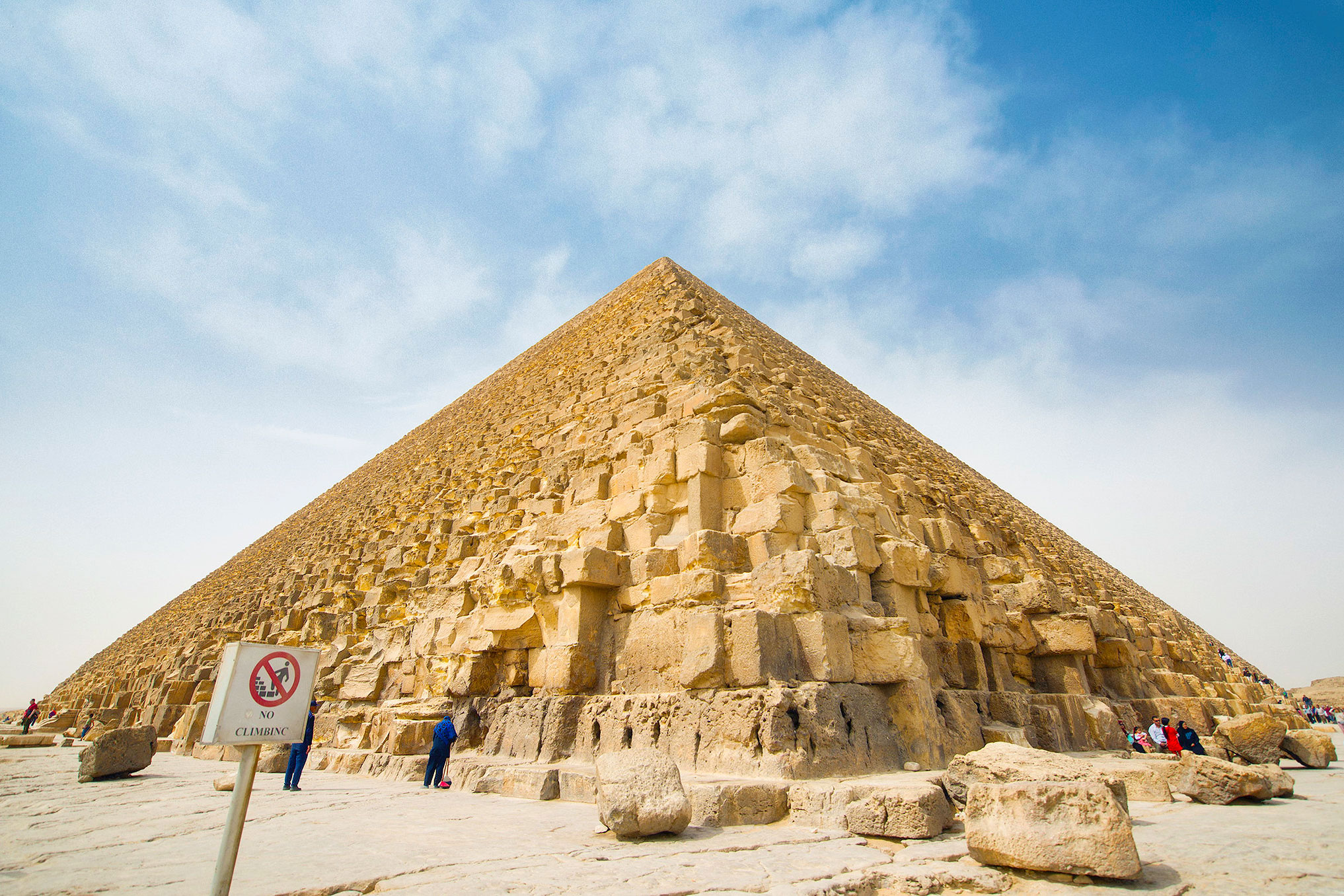 The Menkaure Pyramid is the youngest and smallest of the great pyramids of Giza that comes third in the line of the kingship of the great fourth dynasty that achieved immortality through their colossal constructions that stood strong against the passing of time and oblivion. Everyone will open their eyes to the endless beauty and glory of one of the most legendary archaeological wonders on the face of the earth.

"Mankaure is Divine" was the title of this golden pyramid which inspired in both body and soul the creation of the greatest architectural wonders found across the golden capital of Egypt "Cairo". Many great secrets and mysteries of this golden wonder will be unlocked while discovering this everlasting gem.

Location & How to Get to the Pyramid of Menkaure

The pyramid of Menkaure is located in the heart of the Necropolis of Giza on the outskirts of Cairo next to the great pyramids of Khafre, Khufu, and Sphinx.

Pyramid of Menkaure History & the Purpose of Building It 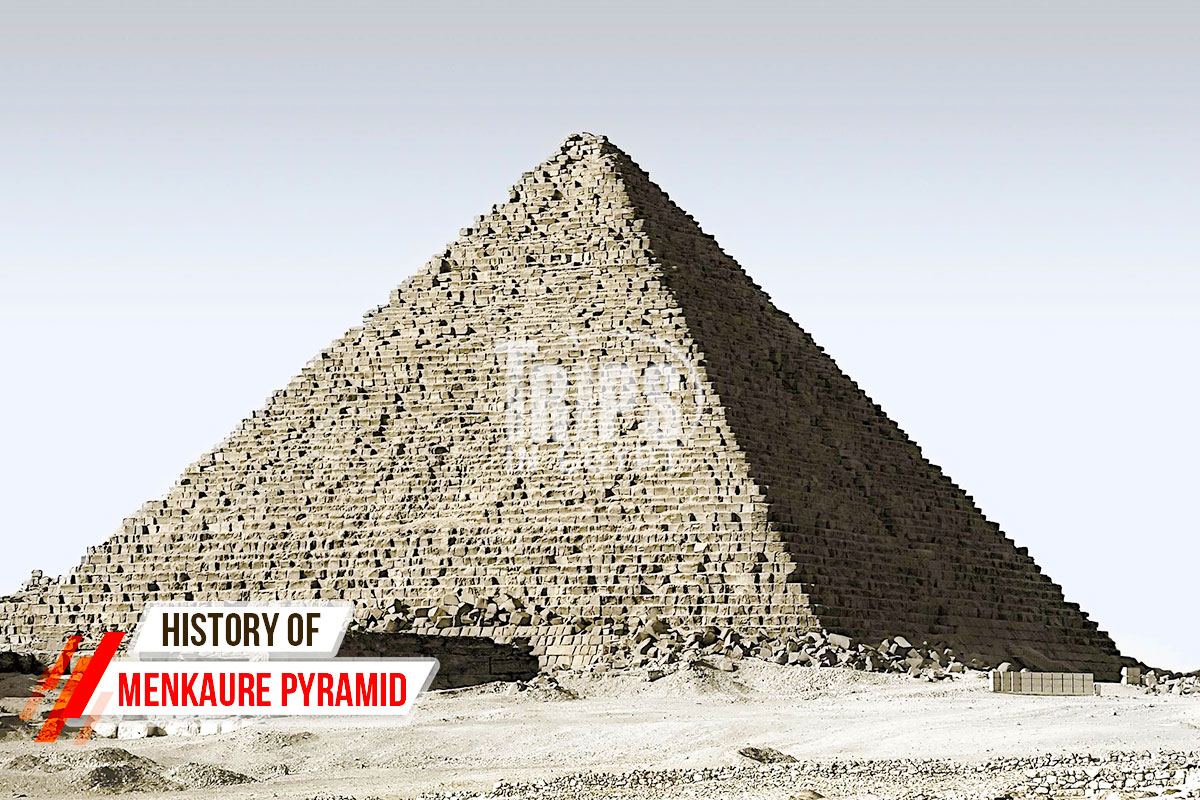 The Pyramid was built by King Menkaure (2532 – 2503 BC) as the third and final pyramid of the colossal pyramids of the great Giza complex. Menkaure was the son of Khafre (Chephren), and grandson of Khufu (Cheops) and was the fifth ruler of the 4th Dynasty of the Old Kingdom of Egypt who wished to honor the legacy of his bloodline. He had two known wives which are Queen Khamerernebty II and Queen Rekhetre who were found in the smaller pyramids.

Size and Construction of Menkaure Pyramid 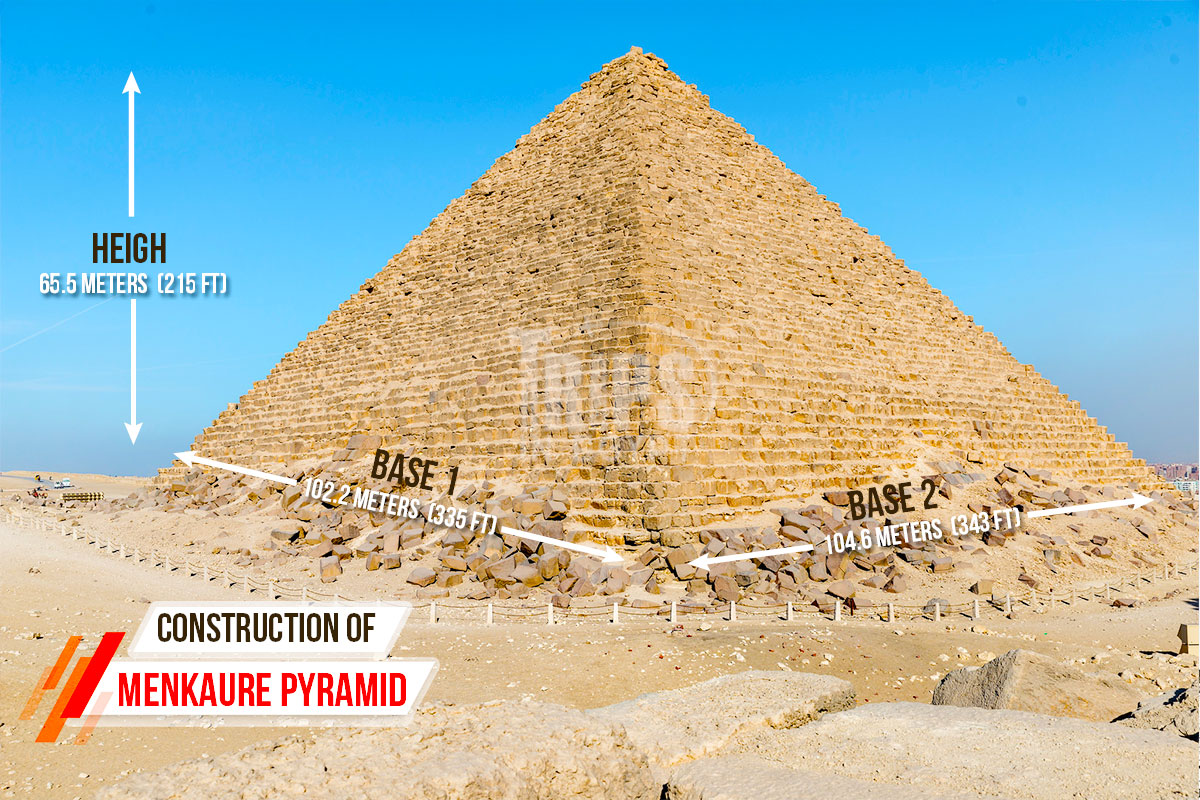 The pyramid of Menkaure is known to have a total height of 65.5 meters (215 ft) which made it in turn the smallest of the three pyramids of Giza and also because of the limited space left on the Giza plateau. The height of the pyramid fell to 204 ft after the removal of structural parts. The pyramid has a base of 102.2 by 104.6 meters (335 ft × 343 ft) with a slope of 51°20'25''. About 20,000 skilled workers with their families lived within the Giza plateau during the construction of the pyramid.

This true pyramid is made from a number of materials such are limestone for the core, pink granite from Aswan that traveled for 800 km which was used to make the bottom quarter of the casting stones, Red granite which was used on the first 16 courses of the pyramid exterior, Tura & white limestone used to case the upper portion of the pyramid. The pyramid is surrounded by three smaller pyramids dedicated to the queens' burials. The Pyramid doesn’t have any satellite pyramids like the rest of the Giza pyramids.

Many pieces of granite are left on the ground. Some part of this pyramid was left unfinished due to the rushed process of completing the pyramid before the expected death of the Pharaoh. The incomplete parts of the pyramid were the key to understanding the methods used in the ancient Egyptian methods of construction. 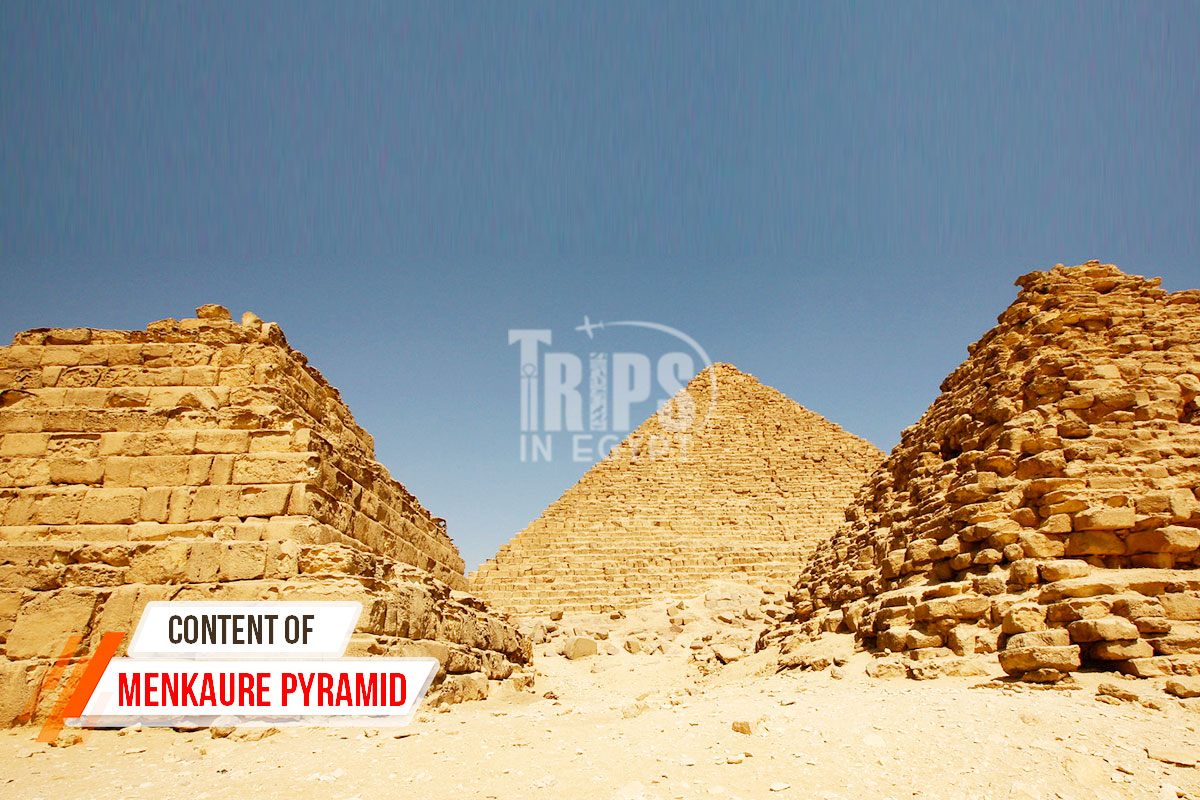 The Pyramid complex is composed of three items the Pyramid Temple, the valley temple, and the Queens’ pyramids. The inner core and the foundations of the pyramid temple were made of limestone while the floors were made of granite. The stone wall blocks of the mortuary temple weigh about 220 tons. The temple was finished by Menkaure's successor Shepseskaf. The mortuary temple holds an inscription that says made the temple his monument for his father, the king of upper and lower Egypt.

Within the valley, a temple is a number of statues of Menkaure made in the artistic style of naturalistic of the Old Kingdom which is able to show great detail discovered in the 2nd century AD by George Reisner. The Queen's pyramids can be found in the south of the Menkaure pyramid where the easternmost pyramid was a true pyramid by far the biggest and some believe that it is where the Menkaure body was mummified. 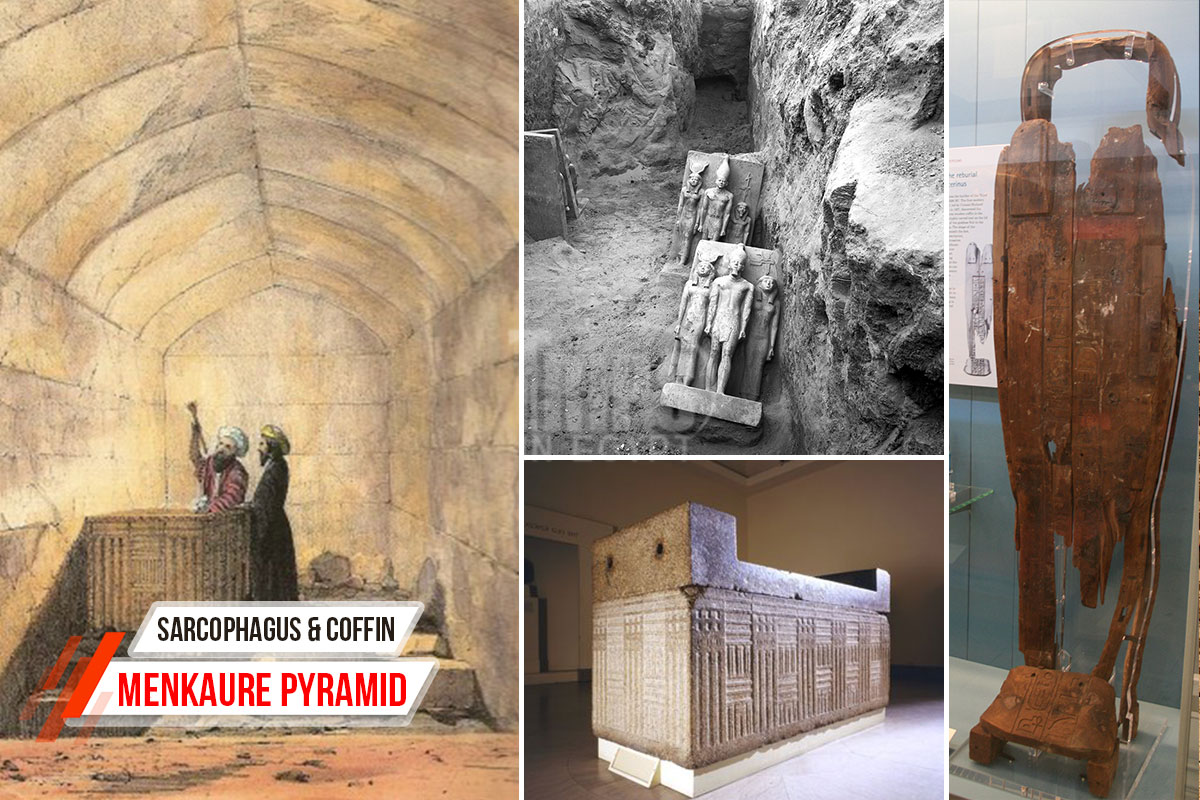 Great mystery surrounds the great pyramid since 1837 when a British archaeologist Howard Vyse discovered in the Upper antechamber the remains of an old wood anthropoid coffin which possess human bones and the pharaoh's name which is believed to be a fake coffin from the Hyksos age as when the bones were Radiocarbon dates, it was found less than two thousands of years old.

There is great evidence that proves that the belongings of the pyramid were robbed and replaced in roman times. The real anthropoid coffin can be found in the British Museum in England. In the deep center of the pyramid, a basalt sarcophagus was discovered with a beautiful cornice containing a young woman's bones that sun in the Mediterranean sea in 1838 on its way to Britain. 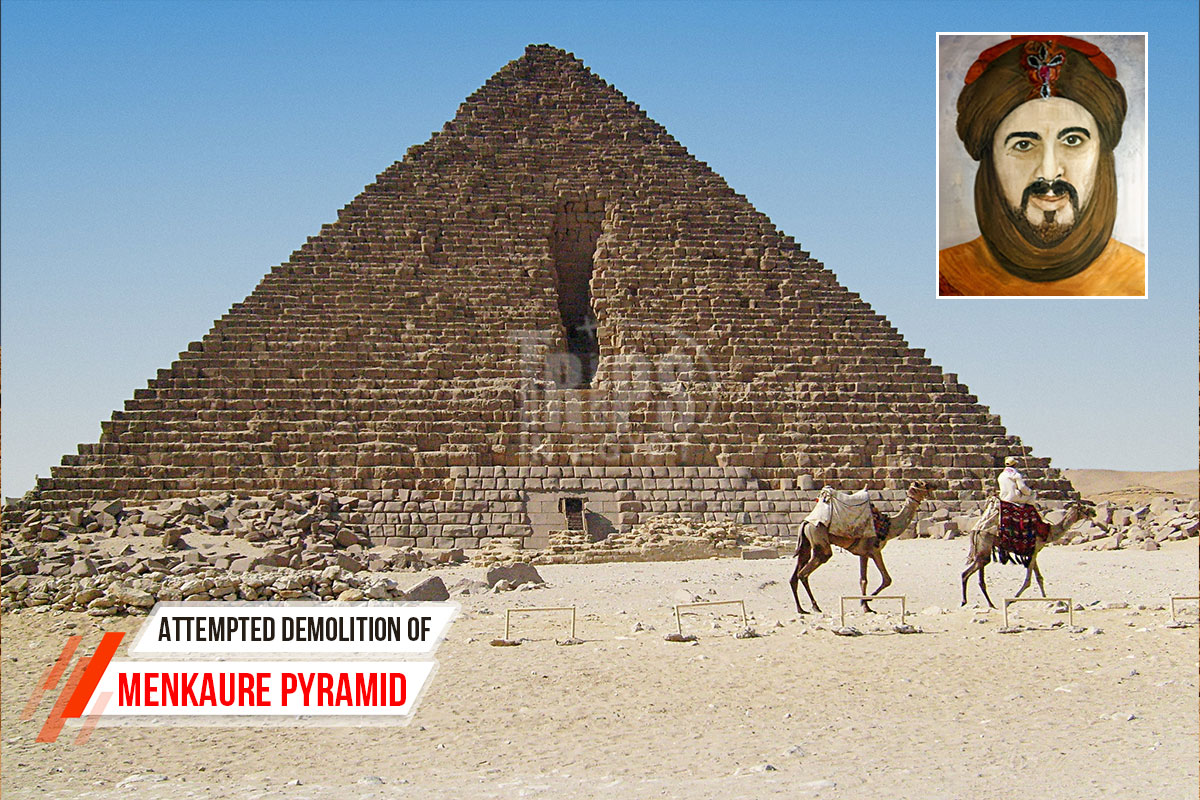 The pyramid was the victim of attempted demolition which took place by Saladin’s son Al Aziz Uthman in 1196 AD who wanted to destroy the pyramids by failed in doing so after eight months when he released that the process was extremely expensive as only one or two stones where removed after a lot of effort.

As a result of the demolition, a large vertical cut can be found in its northern face. Bonaparte’s archaeologists dismantled the third annex of the pyramid in order to study it. All the white limestone casing of the pyramid was removed in order to use in the construction of the Islamic attractions of Cairo.

Trips in Egypt will be the key to having the most thrilling adventure with our Egypt tour packages which will provide a magical entrance leading to the golden and epic wonders of Egypt that is able to shed light on many great facts surrounding this magnification civilization that crosses across the Nile River which everyone can explore with our magical Nile Cruises and live the most blessed travel adventure of a lifetime across all the countless treasures of Egypt.

Why Is there a hole in the Pyramid of Menkaure?

The hole found in the northern face of the pyramid was made in 1196 AD by Al Aziz Uthman, son of Salah El din to find the treasures and artifacts inside the pyramid.

Can you go inside the Pyramid of Menkaure?

Yes, everyone can go inside the Pyramid of Menkaure but a ticket has to be bought before going inside the pyramid.

What is special about the Menkaure pyramid?

The pyramid of Menkaure was the last pyramid to be built in Giza and by far the smallest at a height of 65 meters (213 feet) made by the fifth pharaoh of the Fourth Dynasty in the 26th century BC.

Why is the pyramid of Menkaure the smallest?

The pyramid of Menkaure is small due to the small space left on the Giza plateau, which limited its size.

How was the pyramid of Menkaure built?

The pyramid of Menkaure was built with a combination of granite and limestone and a workforce of 20,000 free-skilled builders using traditional ancient Egyptian building techniques.

Who discovered the pyramid of Menkaure?

The British Egyptologist Howard Vyse made the first excavations across the Pyramid of Menkaure in 1817 under the supervision of Giovanni Belzoni and in 1837 the discovery of the pyramid was declared.

Why is Menkaure the last great pyramid builder?

Pharaoh Menkaure (2532 – 2503 BC) is the fifth and last ruler of the 4th Dynasty of the Old Kingdom of Egypt who used the last space left in the great Giza plateau to construct a giant pyramid.

How many people built the pyramid of Menkaure?

A workforce between 5,000 to 20,000 free-skilled builders where used to create this immortal archaeological wonder.