The Red pyramid is commonly known as the Shinning or the Northern Pyramid and it has the second-largest base of any pyramid in Egypt, each side measures about 220 m. It is considered the largest of the three major pyramids located at the Dahshur necropolis 40 km outside Cairo near Saqqara. It was built from red limestone. Surprisingly, the pyramid is considered the third largest pyramid in Cairo after the great pyramid of Khufu and the pyramid of Khafre.

The red pyramid used to be cased with white Tura limestone, not red ones, but only a few of these stones now remain at the pyramid’s base. During the Middle Ages, much of the white Tura limestone was taken for buildings in Cairo, which revealed the red limestone beneath. It is built with about 160 layers of stone. It can be fully accessed in addition to the chance to see the burial chamber inside.

History of the Red Pyramid 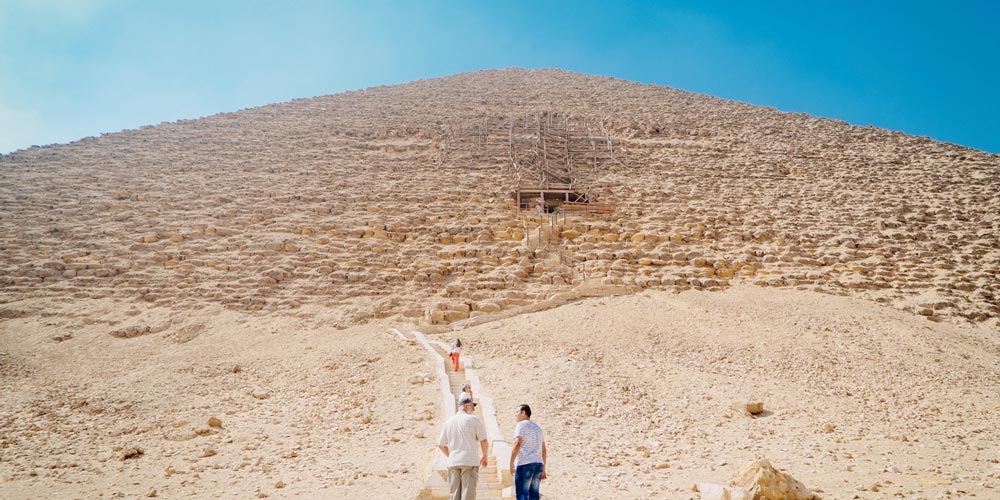 The truly astonishing fact about the Red Pyramid is that Snefru “The Father of Khufu”. It was the third pyramid to be built during Egypt old kingdom. The construction of this terrific pyramid is believed to be started during the thirties year from the reign of Snefru. It took about 17 years to be built.

The construction of such a complex was the result of the crises which have been experienced during the construction of the first two pyramids by Snefru. These Pyramids were the Pyramid at Medium, which collapsed in antiquity, and the second one was the Bent Pyramid that had the angle of its inclination dramatically altered from 54 to 43 degrees part-way through construction.

Description of the Red Pyramid 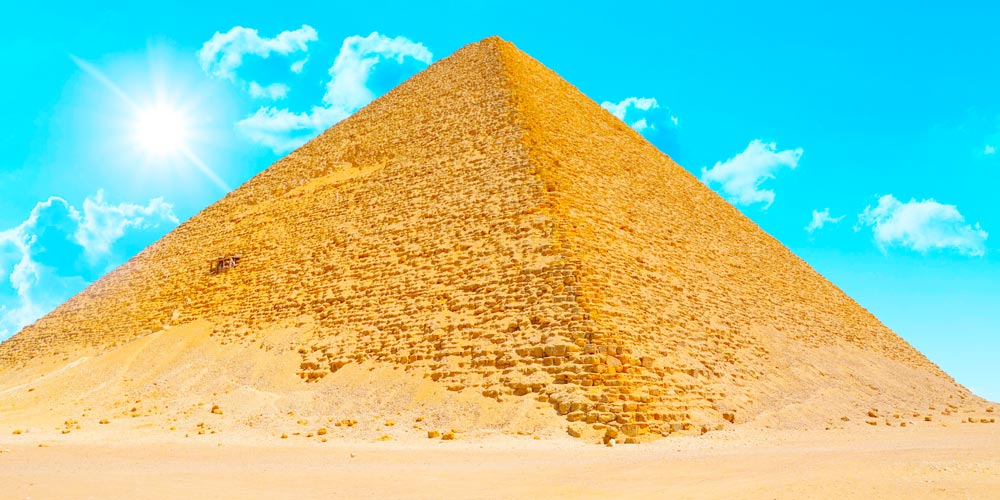 The height of the pyramid is about 105 meters and it has been uncovered & reconstructed and is now on display at Dahshur.  It is an attractive site because of its close location from the army camp. In order to reach the pyramid, tourists have to climb steps built over the stones of the pyramid. Then they go through a passage that is about 4 feet wide and 3 feet in height.

This passage leads into a chamber whose corbelled roof is 40 feet (12 m) high and rises in eleven steps. There is another room inside the pyramid that is reached by a large wooden staircase built for the convenience of tourists. There is also a third chamber with a corbelled roof 50 feet and it is very rough and sunk below the level of the access passage.

Explore the Crimson Pyramid Glowing Under the Sun

It will be a very unique experience to visit the Red Pyramid throughout our Cairo day tours as you won’t find the same crowds of Giza. You can walk around the complex in peace and quiet and you will take terrific photos inside & outside. You can also discover the other attractions of Pharaohs by checking our Egypt tour packages & Nile cruises and book a tour to enjoy all the best of Egypt has to offer in Cairo, Luxor & Aswan.