Valley of The Queens

The Location of Valley of the Queens

It is located near the Valley of the Kings across from Luxor on the west bank of the Nile where you can explore it through a luxury Nile cruise. An example of the tombs located in the Valley of the queen is the gorgeous tomb of queen Nefertari from the 19th dynasty, who was the wife of King Ramesses II. Inside the site, there are also some tombs of the children of the ancient pharaohs from the 19th and the 20th dynasties. The earliest tomb there may belong to the wife of Ramesses I, Sitre. There are tombs of Khaemwese, Titi, and Amonhirkhopsef.

The Tomb of Queen Nefertari 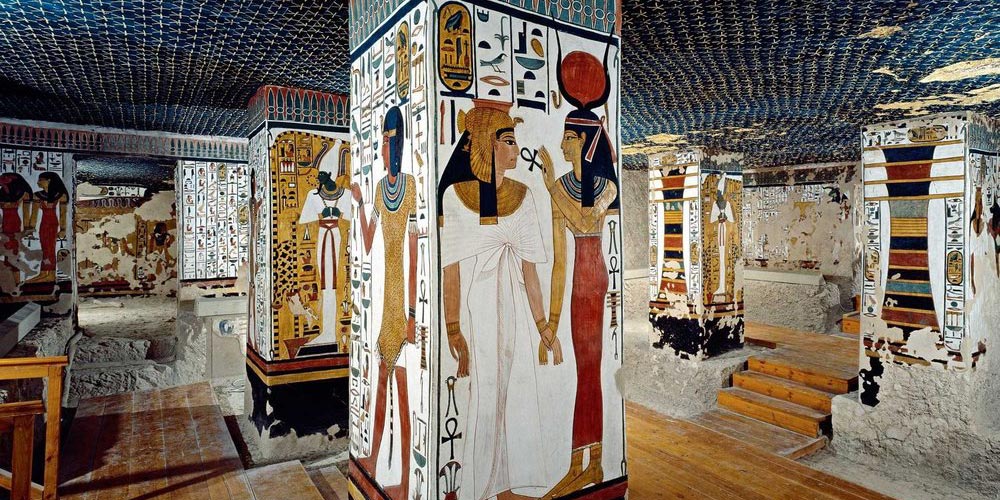 The fantastic tomb of Nefertari was known as Sistine Chapel in ancient Egypt. Queen Nefertari was the chief wife of Ramesses II. They married in 1312 BC and she soon gave him his first son, Amenhirwenemef. Although he married eight times in his life, Nefertari was his true beloved. Ramesses was really devoted to Nefertari and was obsessed with her beauty so he tried to make special things for her.

Queen Nefertari was the main Royal wife of Pharaoh Ramesses II and she also played a vital role in foreign politics. Queen Nefertari was not an ordinary woman and that is why Ramesses wanted the world to know how special she was to him. Ramesses built fantastic temples in honor of Nefertari, which are carved from the cliffs at Abu Simbel in Nubia. In addition to this, he built her a marvelous tomb at the Valley of the Queens.

The Description of Nefertari Tomb

The ceiling of the tomb is painted in dark blue and represents the heavens. The walls are painted in wonderful inscriptions with offering scenes and some depictions of Nefertari being presented to the Gods. In the middle of the chamber, there is a red granite sarcophagus of the queen. This chamber was called the “Golden Hall” by the ancients. Every single place in the tomb depicts the life and death of Queen Nefertari.

Discover All the Hidden Wonders Around Egypt

Finally, Egypt has plenty of historical monuments since the Pharaohs era plus amazing resorts on the red sea, so “Trips in Egypt” provide gorgeous tours to these places with the best services & affordable price through Egypt tour packages.