In this hidden pocket, dimension lies various kinds of activities designed to put an unforgettable smile on your heart and could forever. The city of Hurghada is like a magical breathe of fresh air located across the shores of the red sea. The city resort contains a traditional bazaar, coffee shops, markets, malls, bars, nightclubs, and beautiful hotels. It’s the main focus of the biggest collection of watersports such as diving, snorkeling, wind & kite surfing, and many others around its magical beaches. Here are the best things to do in Hurghada 2022:

1. Reef Diving In the Caves of the Careless Reef One of the most magical things to do in Hurghada is enjoy diving sites in Hurghada. It is the beautiful careless reef located around 14 km northeast of Hurghada between the beautiful islands of Shaab Umm Qamar and Giftun that acts like a marine haven for a dense ecosystem consisting of tuna, jacks, hammerhead shark, a giant moray eels, white tip reef sharks and various more plus it has a lagoon than contains various rare kinds of coral reefs which offers the finest diving experience anyone can imagine. 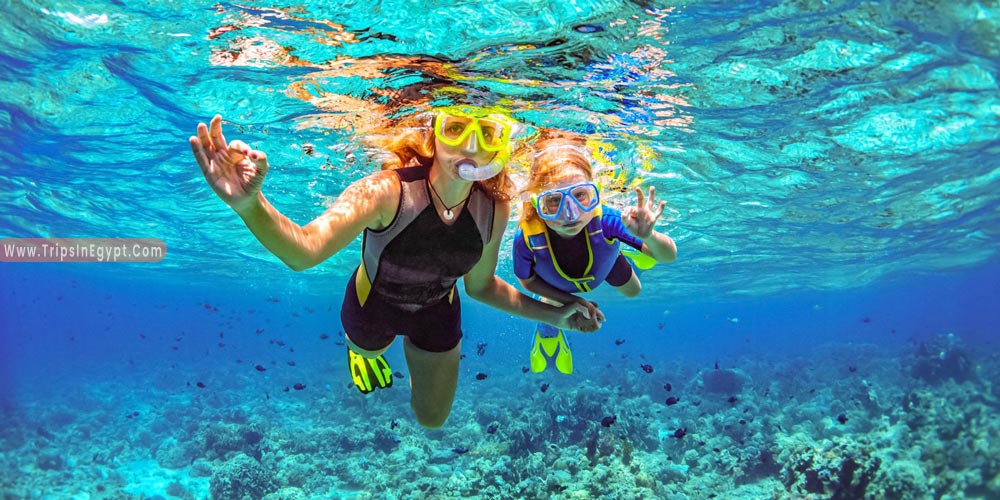 Another one of amazing things to do in Hurghada, enjoy under the waters of the Hurghada which lies a number of hidden miracles that needed to be explored and if you aren’t into diving then snorkeling is one of the best things to do in Hurghada and an awesome way to fully explore the miraculous ecosystem under the sea while swimming between the edge of the heavens of above and below. 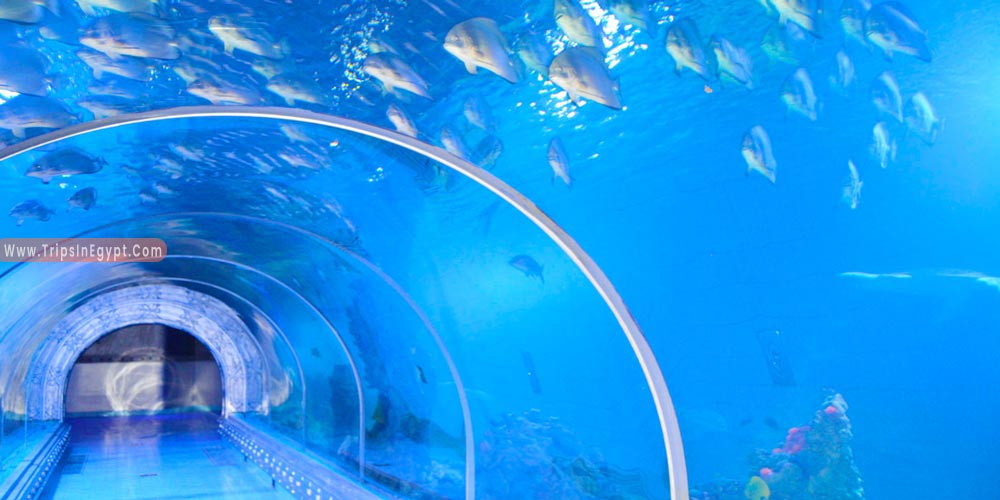 If you want to explore the wonders of the Hurghada red sea without the trouble of getting into the water then you should head to the Hurghada Grand Aquarium which contains over 1200 individual animals, and 100 species such as green sea turtle, shovel nose guitar shark, nurse shark, stingrays, eagle rays and more. It is one of Africa’s largest aquariums, Egypt’s largest and nearly the largest in the Arab world. Visiting Hurghada Grand Aquarium is the best activities in Hurghada where you will get to take a closer look in a very comfortable environment. 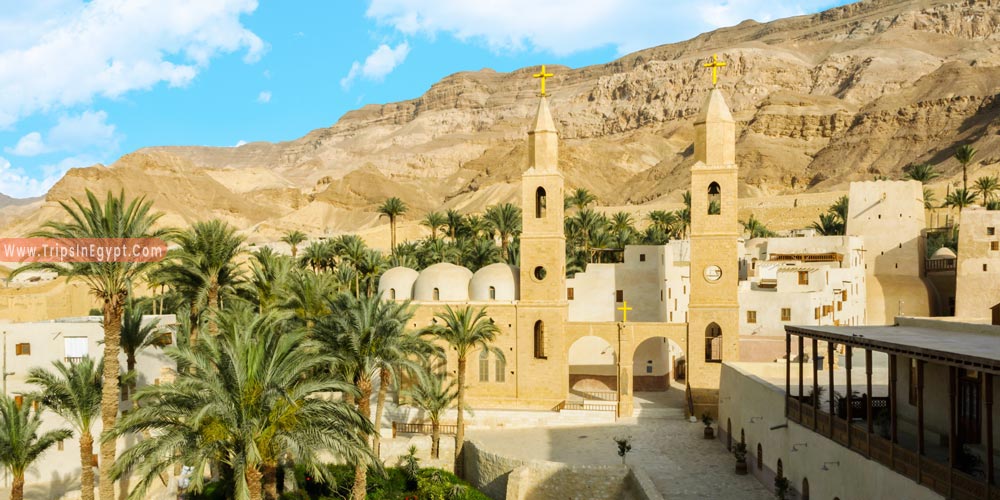 Egypt was the home to one of the most beautiful Coptic churches in the world some of which Monasteries of St. Anthony and St. Paul just 45 km from Hurghada dating to the 4th century AD considered by all to be one of the holiest locations of the Coptic culture in Egypt. The Monastery of St. Anthony is a huge complex that is encircled by high walls, including a bakery, chapels a garden, and churches, all celebrating the father of monasticism Saint Anthony. And after a hike through the cliffs of the Galala Al-Qibliya Mountain, you will reach St. Paul’s monastery, constructed by hermits who isolated themselves in the desert from the material world. 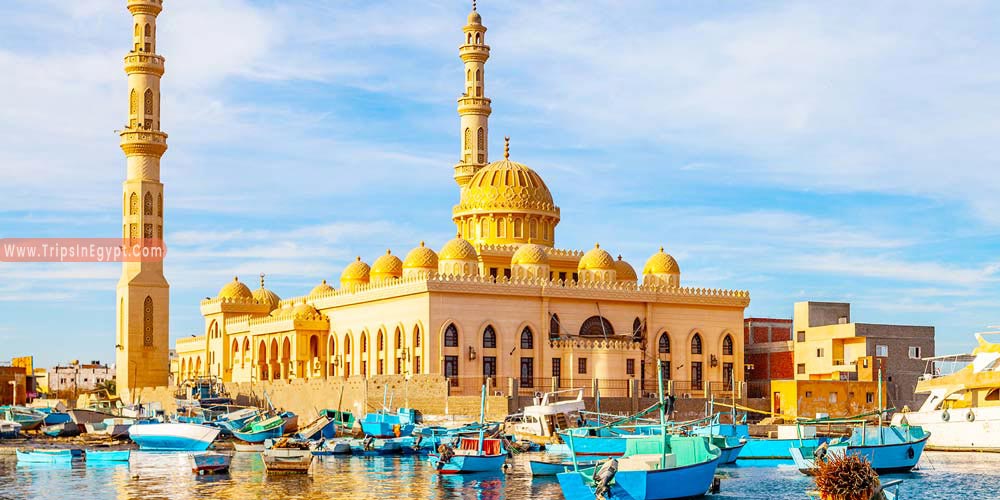 One of the Islamic things to do in Hurghada is visiting the beautiful mosque of Abdel Moneim Riad. This big mosque is an architectural wonder standing tall on its own offering everyone the chance to experience the magical connection between the ancient Islamic culture and the daily life of the beach town. The mosque is perfectly located between the main street and the ocean contains majestic Islamic architecture and intricate design such as the great domes, minarets, arches, and carved hallways.

6. Visit the Church of St. Mary 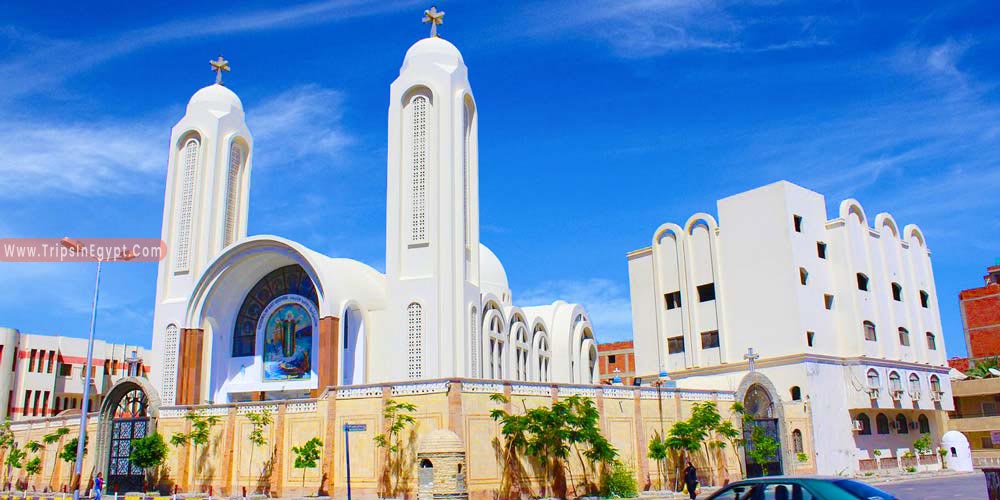 The first evangelical church founded in 2008 across the red sea with a unique design, interesting architecture, and a force of good which offers a special chance to explore a modern wonder never to envisioned in Egypt. 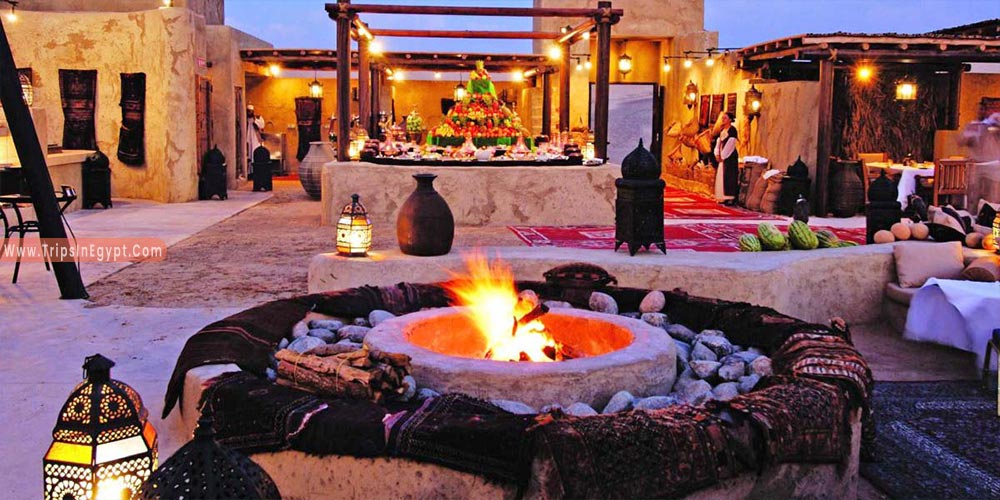 The most delicious cuisines are waiting in the magical unique eastern desert of Hurghada, where you will also explore the Bedouins lifestyle and culture. After a one hour drive, you will get your hands the Bedouin tribe cuisine that will be served to in a glorious fashion and contain as kofta, chicken pie, rice and more, next to a baked Bedouin bread, followed by a delightful Bedouin tea while watching an oriental show and folkloric songs. At night there is nothing more magical than gazing in the sky as the sun sets as you feast on Bedouin BBQ dinner.

Read more about the best destinations to visit from Hurghada. Boarding a cruise to Giftun island is one of best things to do in Hurghada and magical chance to soak up the sun and swim in the clear crystal waters of the red sea .the island is one of the most beautiful and reclusive diving sites in Hurghada located just 45 minutes away by a boat and holds 80% of the biodiversity of the coral reefs in the red sea. Your chance to explore this majestic destination has never been closer all from the board of a cruise. 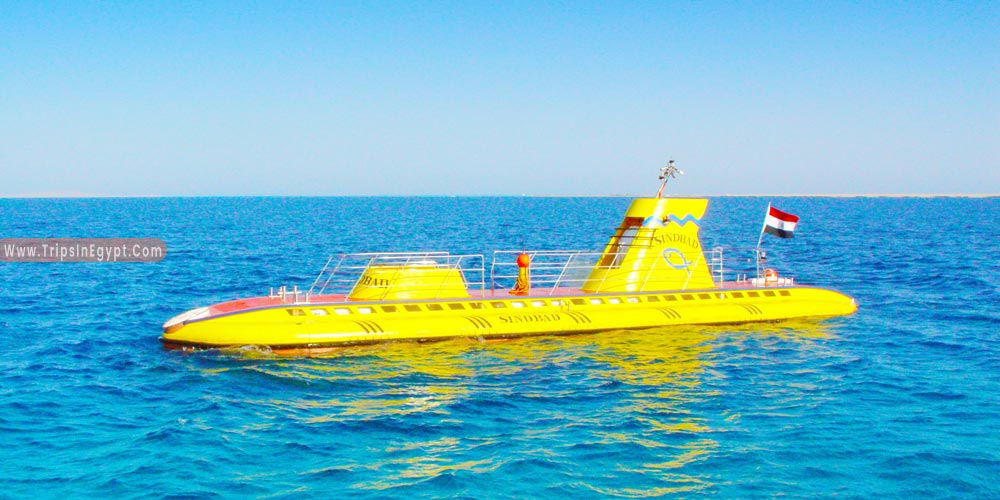 If you don’t like to get wet then our Sinbad submarine is present. itis one of Hurghada’s most adventurous experiences. All the submarines are located in the central area on Hurghada’s marina and can take you 22m underwater and witness the pure beauty, magic, and wonder of the underwater marine life of the Hurghada and witness colored tropical sea creatures of the red sea. 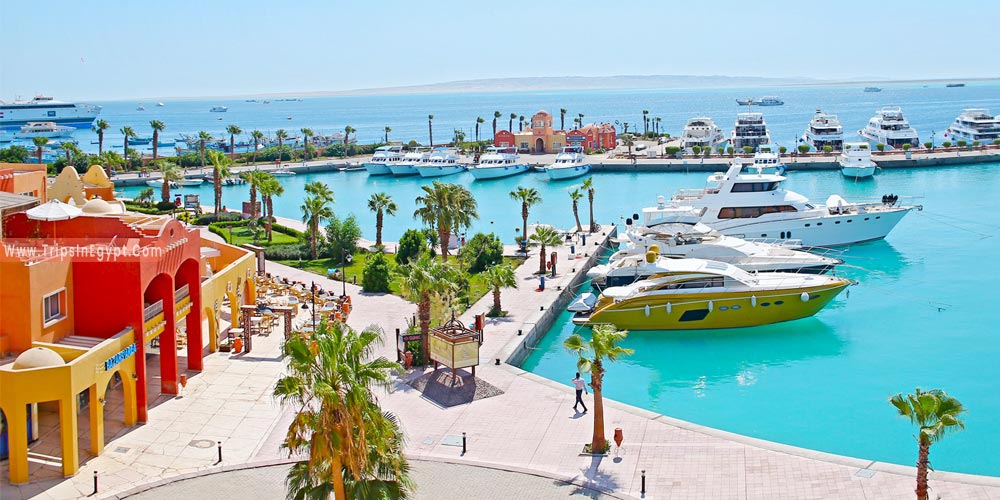 A typical site in wealthy cities is a marina boulevard where the one percent store their multi-million dollar yachts that can be seen floating across the red sea. The sight of the marina will be truly magical capturing the luxury of Hurghada. So if you are one of the wealthy sun-seekers and wish to explore the upscale bars, pubs or cafés then you are in the right place. There is no greater artistic spectacle in Hurghada than the 1001 Nights Showa.k.a‘ Alf Layla w Layla’ which is held daily in an open-air theatre the Fantasia four-star Hotel in the Egyptian resort, this exotic and oriental-showcased event showcases scenes from the legend of the Scheherezade at the times of the Pharaos and ancient cults supported by sound and light effects, horse carriage rides, and belly dancers, plus traditional Nubian music. It’s considered one of the famous things to do in Hurghada which can’t miss during your stay in Hurghada.

12. Travel to Straits of Gubal The straits of Gubalis located between the mainland part of northern Egypt and the Sinai Peninsula which connects the Gulf of Suez to the red sea. The straits have the depth of 50 m (164 ft) and famous for having many small islands, various kinds of coral reefs, world-famous wrecks like the SS Thistlegorm, the Gubal Barge, the Ulysses wreck, the wreck of the Kingston, the wreck of Rosalie Moller and many underwater caves and natural passages which makes it one of the most famous diving spots on earth. It is also blessed with an incredible collection of sea creatures such as glassfish, barracudas, devilfish, angelfish, dolphins, rare moonfish and many more. The pure natural atmosphere of the desert is always better explored by riding a camel-like the ancient days. You will get to travel across the essence of the dessert and enjoy all the spectacular destinations in the desert like the majestic Bedouin villages and all the natural attractions hidden inside the eastern desert. Enjoying astronomical nights in Hurghada is one of the charming things to do in Hurghada that can’t be missed. The astronomical night of Hurghada is a miraculous vision that contains infinite stars and galaxies where the grace of the almighty is shown by billions of light bulbs that spread its light across the majestic shadow of the night. You will get to dine into the core of the eastern desert and witness the wonders of space with a telescope and witness the miraculous cosmic gifts of the universe. Just 65 km southeast of Hurghada is the magical diving site of Abu Nuhas Shipwreck Sites which contains five massive underwater shipwrecks for underwater exploration such as the great wreck of the Carnatic which is a UK cargo ship sunk in 1869 which has stayed in incredibly good condition with its skeletal remains home to flourishing coral and abundant fish life then comes the Greek ship Chrisoula K that sunk in 1981 and the GermanKimon M which sunk in 1978 which are two very popular wreck dives in this area with plenty of opportunities to witness lionfish, triggerfish, and pipefish.

In this heavenly aquarium lies a diver’s dream, gotaaburamadaa.k.a the aquarium is the essence of what diving experience is all about, located between not far from Hurghada. In the ethereal plus sparkling waters is the home of a magical marine life like the abundance of hard and soft corals plus a number of butterflyfish, bannerfish, snappers, goatfish and many more.

It’s Time to Enjoy your Dream Tour from Hurghada

Unleash your imagination to enjoy the glory of the ancient pharaohs beside to enjoy the best things to do in Hurghada like snorkeling, diving and safari trips through our Hurghada excursions. Enjoy the best experience you don’t have ever and heck our tours from Hurghada below and book now!!!